Return to the China Towns & Cities Index Page
Section 1: An Introduction to Shanghai 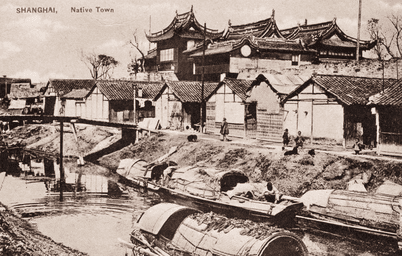 During the Ming dynasty (1368–1644) roughly 70 percent of the cultivated land around Shanghai was given to the production of cotton to feed the city’s cotton and silk-spinning industry. By the middle of the 18th century there were more than 20,000 people employed as cotton spinners.

Following the 1850s the predominantly agricultural focus of the economy was quickly transformed. At this time the city became the major Chinese base for commercial imperialism by Western nations. Following a humiliating defeat by Great Britain in the first Opium War (1839–42), the Chinese surrendered Shanghai and signed the Treaty of Nanking (Nanjing), which opened the city to unrestricted foreign trade. The British, French, and Americans were the first to take possession of designated areas - the concessions - in the city, within which they were granted special rights and privileges. The Japanese received a concession in 1895 under the terms of the Treaty of Shimonoseki, following their victory in the First Sino-Japanese War.

The opening of Shanghai to foreign business immediately led to the establishment of major European banks and multipurpose commercial houses. Shanghai rapidly grew to become China’s leading port and by 1860 accounted for about 25 percent of the total shipping tonnage entering and departing the country. As the flow of foreign capital steadily increased after the first Sino-Japanese War (1894–95), light industries were established within the foreign concessions, which took advantage of Shanghai’s ample and cheap labour supply, local raw materials, and inexpensive power. Shanghai soon developed to be the city that, then as now, was "a haven for the very rich, and a hell-hole for the poor".
Above (left) Western sailors in a bar on Rue Chu Pao San in 1935, (right) a throng of advertising billboards on Nanking Rd, 1947.
"Sin City", Blood Alley and the Frisco Cafe, 31 Edward VII Avenue
​
The International Setlement came to a swift end in December 1941; the settlement had remained an island of independence in what was by then a Japanese occupied region controlled by their puppet government at Nanking (Nanjing) for several years. Japanese troops stormed in immediately following the attack on Pearl Harbor. In 1943, with Shanghai still occupied by the Japanese, Chiang Kaishek's government at the war-time capital at Chungking (Chongqing) formalised new treaties with Britain and the USA (and later France) which forever abolished the concessions.
Above: some of the stamps of Shanghai: (left) a red 40 cash local post issue of c1886. (Centre-left) US Postage 6 cents surcharge for Shanghai use at 12 Cents, issued 1919-1922. The US postal agency in Shanghai closed in 1922, as did all other foreign postal agencies. (Centre_right) 5 Cents Shanghai Municipality local post of 1892. (Right) Overprinted French 50c for China, c1900. The French Civilian post office in Shanghai opened in 1862.

Below: (left) German Post Offices in China, c1906, (centre-left) British Post Offices - Hong Kong 8 Cents, (centre-right) Japanese post offices, Shanghai, 5 Sen c1900, (right) Russian post offices 25 cents surcharge.
Local Chinese investment in Shanghai’s industry was minimal until World War I diverted foreign capital from China. From 1914 through the early 1920s, Chinese investors were able to gain a tenuous foothold in the scramble to develop the industrial economy.
The 1920s was also a period of growing political awareness in Shanghai. Members of the working class, students, and intellectuals became increasingly politicized as foreign domination of the city’s economic and political life became ever more oppressive. When the agreements signed by the United Kingdom, the United States, and Japan at the Washington Conference of 1922 failed to satisfy Chinese demands, boycotts of foreign goods were instituted. The Chinese Communist Party was founded in Shanghai in 1921, and four years later the Communist Party led the “May 30” uprising of students and workers. This massive political demonstration was directed against feudalism, capitalism, and official connivance in foreign imperialistic ventures. The student-worker coalition actively supported the Nationalist armies under Chiang Kai-shek, but the coalition and the Communist Party were violently suppressed by the Nationalists in 1927.
Above: (left) commuters and roadworks on a central Shanghai street in 1931. (centre) The Longhwa Pagoda, (right) The Customs House on the Bund.
assorted carrier-based aircraft with the expectation of destroying the Chinese Air Force, but encountered unexpected resistance from the defending Chinese fighter squadrons; suffering heavy (50%) losses from the defending Chinese pilots.
Three months of fierce fighting commenced, involving nearly 1 million troops; the strength of resistance surprised the Japanese. Nonetheless, Tokyo soon took control of all of the Chinese controlled municipality - with Chinese forces making a fateful retreat towards Nanking - leaving only the International Settlement as an island of independence and nominal Nationalist Chinese control. This too would of course not last. Following the December 1941 attack on Pearl Harbor, the Japanese forces moved quickly to take control of the remainder of Shanghai (and of Hong Kong).
Above: (left) a view along the Nanking Road during the late 1930s. (right) the aftermath of one of many attacks in 1937, during the beginnings of the 1937-1945 Sino-Japanese War.
Refugees in Shanghai
barracks and outfitted with hard, narrow bunk beds under which the residents stored their few belongings. By the end of 1939, about 2,500 people lived in the Heime, sleeping anywhere from six to 150 to a room. An additional 4,500 individuals ate in soup kitchens set up in the Heime but lived elsewhere in rented rooms. Many of them received relief help to pay for all or part of their housing costs.

(adapted from the article: "German And Austrian Refugees in Shanghai", US Holocaust Memorial Museum.)
The End of 'Old Shanghai'
Following the defeat of Japan in 1945, Shanghai returned briefly to being something of it's former self, though without the semi-colonialism of the now abolished International Settlement and the other concessions.
Any peace and unity was short lived, as the Civil War between the Nationalists and the Communists resumed. 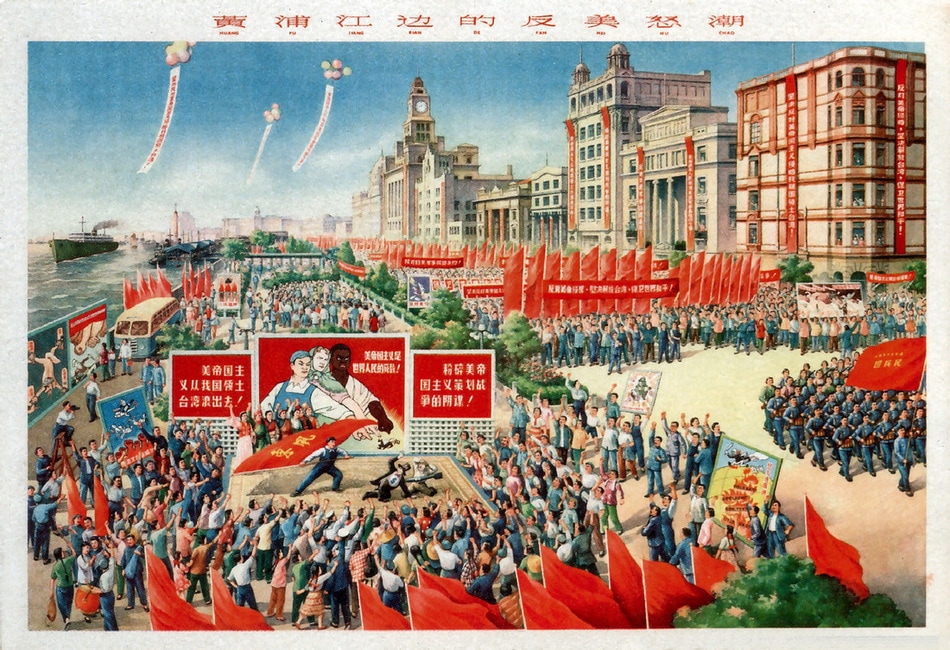 Forward to: Shanghai Section 2: The Currency
Powered by