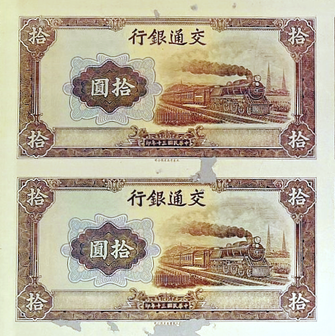 Forgeries made during the period of issue of the original note are a fascinating area for collecting and study, and such items are the one type of forgery that in most cases you do want to find in your collection. Such currency is far scarcer and nearly always more valuable now than the original note, at least in the case of commonplace notes.

Both individuals and larger criminal gangs have been forging paper currency since it's introduction, and with varying degrees of success. Some forgeries are very difficult to spot while others are almost laughable in their incompetence, though sometimes even fairly obvious forgeries can be found heavily circulated, with some seemingly never having been identified.

Not all forgeries are the product of straightforward criminal activity. During periods of conflict, a common weapon against an enemy government is to flood their areas of control with fake money to destablise their economy, spreading discontent and therefore weakening their support and control. This tactic was used widely during World War II in Europe and Asia. The Japanese widely counterfeited the issues of the Chinese Nationalist government banks; sometimes using the original printing plates when Shanghai and Hong Kong came under their control. The Norborito Army Laboratory in Japan was responsible for creating and printing many of the forgeries (see below), though unfortunately the detailed records of their activities were destroyed at the time of Japan's surrender in 1945. The Communists are also believed to have forged nationalist currency. The Nationalists in turn greatly forged Japan's money and that of it's 'puppet banks' in occupied regions of China.


The Norborito Army Laboratory in Japan

The wartime currency forgery by the Japanese was on a massive scale with hundreds of millions of yuan in forged notes being transferred to mainland China every month. This was part of Japan's wartime strategy to undermine the Nationalist regime of Chiang Kai Shek by disrupting, even ruining the economy. Much of this money was circulated through it's distribution to occupying Japanese troops, and by collaboration with criminal gangs in Shanghai (c. below: 1941 10 yuan, P159a). Some of this currency may have been forged from the original engraving plates as the Dah Tung plant fell under Japanese control in 1941.

The Nationalists in turn developed their own scheme, forging issues of the puppet banks (such as the 1940 5 and 10 yuan of the Central Reserve Bank of China) for similar purposes.

Right: examples of unfinished forgeries of the Bank of Communications 1941 10 yuan (P159a), found at the site of the Norborito Laboratory.

The Japanese forgeries are also thought to include 5 yuan issues (of the Bank of China and Central Bank), the 1940 Bank of China 10 yuan issue depicting Sun Yatsen (the ABNCo note). Also the 1, 5 and 10 yuan notes of the Farmers Bank of China (forged in April 1940). Further the capture of millions of partially completed notes and the forgery itself are most likely the principle reasons for the decision by the Nationalist government at Chungking (Chongqing) to restrict currency issue to the Central Bank of China, from 1942.

An article on the Japanese forgeries:

This article was originally written by Nobuyuki Watanabe and published January 6, 2015 on the Asahi Shimbun website.
​
Across Asia

Beyond China, the Allies: namely the US, Britain and Australia were forging the Japanese occupation money for Burma, Malaya, the Philippines, the Netherlands Indies and Oceania. In Australia, in addition to the officially sanctioned counterfeits; one or more small businesses were producing replicas of the Oceania money which held a particular 'morbid' interest at the time due it being denominated in pounds and shillings - it was a common but mistaken belief that this money was for a planned invasion of Australia by Japan.

​Some examples of period forgeries

Above: Central Reserve Bank of China (Japanese puppet bank) 5000 Yuan of 1945. The upper left (front only) note is genuine, the lower left (front only) is a fake identified by the bank or other authority with cancellation overprints in Chinese. The low quality of the genuine notes must have made forgeries harder to spot and the only obvious differences are the slightly clumsier portrait and the thinner block letters. Above right is another forgery of this note, possibly by the same counterfeiter. Unlike the other example, this note has cancellation overprints in Chinese and English and has further been punch cancelled.
​

Old Forged overprints and other altered genuine notes
​
Hong Kong
Miscellaneous Asian forgeries
National Government (Note: the forgeries are described as emanating from Czechoslovakia in Area Handbook for Laos, DA PAM 550-58 1972).
​
The forgeries were good enough to fool the common Lao peasant, but there were some major errors in the printing. For instance, the most noticeable is that the paper of the original banknotes has small colored security dots that are missing in the forgeries. These communist-produced “Vientiane kip” notes were first used to help finance the formation of a short-lived coalition government headed by Prince Souvanna Phouma. In the early 1970s, the replicas were used by the Lao People’s Revolutionary party (whose military arm was the Pathet Lao) as military occupation currency in areas under their control.

A Chinese reference book entitled Contemporary China’s Banknote Printing and Minting  for Foreign Countries, China Financial Clearing House, 2000, was found by a specialist in Lao currencies in 2007. The book mentions that the Chinese prepared banknotes for Cuba, Laos, Cambodia, Vietnam and Mongolia. It also states that the Pathet Lao banknotes were printed in the Shanghai banknote printing facility in April 1968, and the banknotes were legal tender in their “liberated” areas. Apparently, there was a secret agreement between the Royal and Pathet Lao governments for each to circulate their own banknotes with the same basic design. The Royal Lao government had their banknotes printed in the United States and the Pathet Lao had theirs printed in China. (note: there may be some confusion here with the various series printed by the Chinese at Shanghai, such as the SCWPM Laos P19A 1 Kip, etc).

In 1970, a former CIA agent stated that his forces captured a cave complex holding the Pathet Lao supply of banknotes.  It was a very large number of banknotes and all were flown back to Vientiane.  At first, the captured banknotes were going to be overstamped with a propaganda message and dropped over Pathet Lao “liberated” areas, but there were far too many banknotes and too few personnel to do the job.  It was then decided to just drop them over the “liberated” areas and ruin the economy with a large amount of currency chasing few goods and services.

This operation led to spurious report of the United States forging Laotian currency. Rumors of a CIA-sponsored forgery project have circulated since the early 1970s. Christopher Robbins, in Air America, Putnam & Sons, 1979, page 132, writes:
Another top secret Agency project involved dropping millions of dollars in forged Pathet Lao currency in an attempt to wreck the economy by flooding it with paper money. Pilots on routine night drops would be asked to return over Communist lines drop several packages. It turned out the packages were full of counterfeit money.

Air American pilot William Wofford said:
We must have dropped two hundred pounds weight of money, hundreds of millions of kip. They were just in paper bags and had these devices the kicker pulled which ignited a small charge and blew the bag apart. The money was packed loosely, and when the bag blew the money would scatter and drift all over the area. I’m sure a few people ate well the next day. When we got back to Vientiane, we had to spend two hours cleaning the airplane because some of the bags burst before we could get them out and we had counterfeit money from one end of the airplane to the other.

A pilot told me:
The C-130A's at Naha, Okinawa, had several different missions dropping PSYOP leaflets in Vietnam, North Vietnam and Laos; and counterfeit currency in North Vietnam. All of the leaflets were printed in Okinawa.
The United States produced a great number of general nation-building leaflets in support of the Royal Laotian government in their fight against the Communist Pathet Lao. The same American PSYOP specialists who were printing leaflets for Vietnam printed many of the Laos leaflets."

Back to: Old Forgeries and Modern Fakes Index
Powered by