and factions - including invading nomads from the north - until the Sui Dynasty restored order in 589. Later, the Jin (Jurchen) Dynasty (1115-1234) took control of Northern China including Shantung from the Song Dynasty. Buddhism and Taoism thrived during this period. The Grand Canal was completed in 1293 which further enhanced the region as a centre of trade.

The province formally came into being during the Ming Dynasty (1368–1644), and then assumed more or less it's current state in the mid 17th century, during the early Qing Dynasty (1644-1911).
​
During the late 19th century, Britain and Germany in particular took control of significant parts of the province including the cities of Tsingtao (Germany) and Weihai (Britain). Germany constructed a railway, a military fort and naval base, and developed several coal mines. Unsurprisingly, the growing influence and interference of foreigners in Shantung and China as a whole, saw this region become one of the principle sources and centres of the Boxer Rebellion of 1899-1901. The infamous Qing general and politician Yuan Shikai was appointed as Governor of Shantung during this period to suppress the uprising.

Shortly after the outbreak of the First World War, Germany lost control of it's Shantung territories; despite protestations from the Chinese Government, the 1919 Treaty of Versailles transferred the German concessions in Shandong to Japan instead of restoring Chinese sovereignty over the area. Popular outrage at this outcome led to the May Fourth Movement. In 1922, US led negotiations between China and Japan led to the region finally being handed back to Chinese control. However, in reality control fell more to Chinese warlords than the Chinese government. Among the worst of these was the warlord Zhang Zongchang, nicknamed the "Dogmeat General", installed as military governor of Shantung Province in 1925. Time magazine dubbed him as China's "basest warlord", a contemporary described him as having “the physique of an elephant, the brain of a pig and the temperament of a tiger”. He ruled over the province until 1928, when he was ousted in the wake of the Northern Expedition. Throughout much of the late 1920s, to early 1930s, ordinary life in Shantung was severely disrupted.
​
The Sino-Japanese War of 1937–45

The Nationalist (KMT) general Han Fuju was made Deputy Commander in Chief of the 5th War Area and put in charge defending the lower Yellow River valley. However, he immediately abandoned his base in Tsinan (Jinan) when the Japanese troops crossed the Yellow River. Shortly after he was arrested and executed for not following orders and for possibly collaborating with the Japanese.

Japan gained control of most of Shantung by the end of 1937, though they miscalculated Chinese strength and suffered a serious defeat - their first of the war - at Tai’erzhuang, in southern Shantung, in 1938.

Shantung was occupied in its entirety by Japan - at least on paper - with resistance continuing in the countryside, and was one of the provinces where a scorched earth policy ("kill all", "burn all", "loot all") was implemented by general Yasuji Okamura.

By 1945, communist forces already held some parts of Shantung, from which they had been attacking the Japanese. Following the defeat of the latter, and soon after the failure of peace talks between Mao and Chiang, the pre-war conflict between the communists and nationalists resumed. Over the next four years of the Chinese Civil War, they expanded their holdings, eventually driving the Kuomintang government out of the province by June 1949. The People's Republic of China was founded at Peking (Beijing) in October of the same year.
​
Under the new government, parts of western Shantung were initially given to the short-lived Pingyuan Province, but this was undone in 1953.
Tsinan - Jinan - 濟南
​
The modern name of the city means 'south of the Ji River'. Older texts sometimes give the name as Tsinan-fu, 'fu' being an obsolete term for a provincial capital. The area was occupied for thousands of years; during the times of the Han dynasty (206 BC – 220 AD), Tsinan was the capital of the Kingdom of Jibei. From the 5th Century, Buddhism thrived here which resulted in the development of numerous temples and other sites. Tsinan continued to flourish as a cultural centre through the Song Dynasty.

During the Civil War that followed the proclamation of Kublai Khan as Great Khan in 1260, Tsinan was at the center of a rebellion by Yizhou governor Li Tan against Mongol rule in 1262. The rebellion was crushed in a decisive battle near to the city in late March or early April 1262.

​Tsinan was established as the capital of Shantung Province during the Ming Dynasty.

German influence in the city was considerable from 1897, with a new railway connecting Tsinan with their coastal enclave of Tsingtao (Qingdao), and a concession established on the western side of the city centre.  During the Republican period, Tsinan developed into a major industrial and trading centre.

The Japanese established a major colony in Tsinan and increased their influence throughout Shantung Province following the decline of defeated Germany; a situation which continued even after China regained formal control of the province. By 1931, over 2000 Japanese were resident in Tsinan. A serious clash occurred between the Japanese and KMT forces in 1928 during the Northern Expedition which led to an embarrassing defeat for the latter, with over 2000 civilians killed and many thousands of soldiers killed or injured. The Japanese occupied the entire city for 6 months before withdrawing to Tsingtao in March 1929.
Two street views of Tsinan (Jinan) taken during the 1920s (left) and 1930s (right). It's probable but not certain whether the right hand picture was taken during Japan's wartime occupation of the city, despite the presence of the Japanese flag, as Tsinan had a sizeable Japanese community.
Han Fuju became Governor (of Shantung) from 1930, unifying the province by 1932. He established his base in Tsinan and is credited with curtailing banditry and drug trafficking, thereby bringing a brief period of peace and prosperity to the city. From the mid 1930s, he was placed under increasing pressure by the Japanese to declare independence from China. Though he declined to do so, his later defence of Tsinan and the province during Japan's 1937 invasion was less than half-hearted. He ignored direct orders to defend the city to the death and retreated. For this he was soon after executed by the KMT.

The Japanese occupied the city and province (the latter more in theory than strictly fact) until their defeat in 1945. The KMT briefly regained control only to lose the area for the final time in September 1948, defeated by Communist forces at the Battle of Tsinan (Jinan).
Mount Tai (Taishan)
​
The Confucius Estate
​ 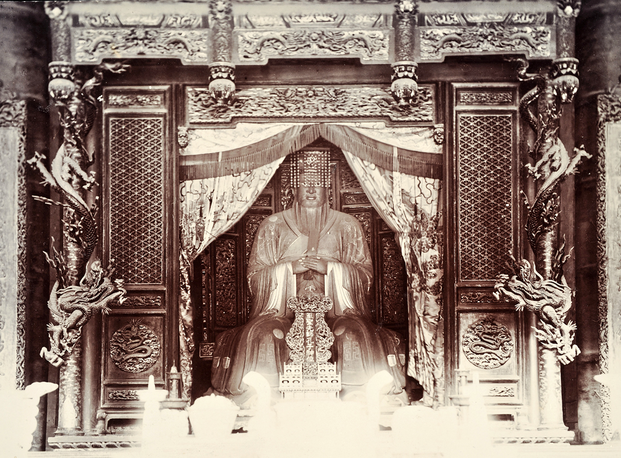 ​The Temple of Confucius in Qufu is one of the three largest ancient architectural complexes in China. Qufu (near Tsining/Jining) is the home town of Confucius; he was born and died here and his descendants have continued to live here (according to tradition) for 2,500 years after his death. Built to commemorate him in 478 B.C., the temple has been destroyed and reconstructed over the centuries; today it comprises more than 100 buildings. The Kong family cemetery in Qufu contains 78 generations of Confucius' relatives. The first born son of the 77th generation (traditionally) was driven out of China in 1948 by the Communists, and resided in Taiwan. The remaining family members survived the Red Guard attacks.


Above: The principle statue of Confucius in the main temple hall (photo c.1910s). This was sadly destroyed during the 1960s and has since been replaced/restored.

Confucius (551 BCE – 479 BCE), was a social philosopher, politician and educator, who focused upon personal and governmental morality, social relationships, justice and sincerity, and is one of the most influential people who have ever lived. The Temple started as three houses in the year of 478 BC, the second year after his death. Over time as Confucianism became ever more significant within Chinese society and culture, the scale of the Temple was expanded accordingly. Sacrifices were often offered to the sage, either by Emperors themselves, or by emperor-appointed high officials. In the Qing Dynasty (1644-1911), Emperor Qianlong offered sacrifices here eight times. The existing Temple of Confucius was rebuilt and renovated during the Ming (1368-1644) and Qing (1644-1911) dynasties and patterned after a royal palace.

For a more thorough overview of the site and a study of the several Central Bank of China series which commemorated this complex, please go to this page The Confucian Series of the Central Bank of China
Some of the Banknotes
​The Bank of China - 中國銀行
​The Bank of Communications - 交通銀行
The Provincial Bank of Shantung - 山東省銀行
Shantung Provincial Treasury - 山東省金庫劵
The Shantung Minsheng Bank - 山東省民生銀行
Chang-Yi Sixth District Exchange Notes - 昌邑六區兌換券
Laiyang Local Economic Cooperatives Exchange note - 莱阳地方经济合作社流通券
Fong Dah Bank
YI Feng Hao - 益豐號  (small commercial issues)
The Beiji Temple ("North Pole Temple") overlooking Daming Lake in Tsinan. A Taoist temple dedicated to the God of the North, Xuan Wu, first built during the Yuan Dynasty and rebuilt in the Ming. The temple was renovated during the late Qing dynasty. The temple was mostly or completely destroyed during the Cultural Revolution and has since been rebuilt. Taken from a distance, the right image shows the roof of the main hall of the temple which is often obscured in images.
Sources: