The Confucian Series of the Central Bank of China
​ 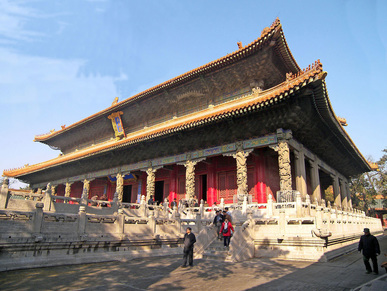 During the middle of the 1930's, the Central Bank of China began to issue a series of now misunderstood thematically related notes, some of which have long been misidentified and incorrectly dated in catalogues.

These banknotes were introduced following the banking and currency reforms of 1935, as part of the new fabi or legal tender yuan. Designed and produced by three different printing firms: Thomas de la Rue of London, Waterlow and Sons of London, and the Chung Hwa Book Company of Shanghai, these notes share the common theme of depicting monuments and imagery commemorating Confucius, the ancient philosopher of (pre) 'Warring States' China.

​The theme may seem an unusual choice considering the place held by Confucianism in old Imperial society, with close ties to the Imperial Court which had been overthrown during the revolution of 1911-12. Furthermore, many of the senior figures in the Nationalist Government were Christians including Chiang Kai-shek and the by then deceased (d.1926) Dr Sun Yatsen, founder of the Republic. However Chiang himself had ties to Confucianism and as the Chinese had done for centuries, combined Chinese traditions with the imported Christian ideas. In 1934 Chiang and his wife Soong Mei-ling founded the New Life Movement, a civic-educational movement which blended Confucianism with Christianity and authoritarian nationalism, and is with justification often compared with fascism.

​The long tradition of Confucianism was an important component of Chinese Nationalism, and the principle monuments of the 'cult' were and are located in Chefoo (Qufu) in Shantung (Shandong), "a cradle of Chinese Civilisation". A further aspect perhaps was the ongoing Japanese influence in the province. Germany had controlled the concessions within the province until defeat in World War I. The Chinese had sought to have the region fully restored to their control however the concessions were handed to the Japanese in 1919. This led to widespread popular protest and the rise of the May 4th Movement. In 1922 China finally managed to regain the concessions, however Japanese influence was fully entrenched in the region.
​ 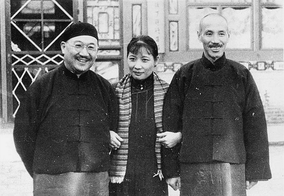 The principle reason for the design choice however was most likely the appointment of the new Governor of the Central Bank of China in 1933; the Finance Minister H.H. Kung, a powerful and central figure in the government. He was of the family of Confucius (at least according to tradition), the estate at Qufu was his ancestral burial ground and site of the Kung family mansion. Indeed, unusually, he had his signature placed alongside that of the General Manager on some of the currency between 1936 and 1945, including some of the issues being focused upon here.

Despite the claims of the World Paper Money catalogue which oddly dates these notes to 1931, they cannot have been issued before 1935. The simple reason is that the bank officials whose signatures appear on the reverse of all issues were not in office together until 1935. And when the subject matter of the vignettes is also taken into account, the time of issue becomes obvious. The first issued note of this series (the 10 cents) was placed into circulation in December 1935 ("The Catalogue of paper currency issued by the KMT government from 1935 by The Central Bank of China” by Zhang Zhichao).
​
​
The Chung Hwa Book Co. 1936 'Pailou' issues

The front vignette is identical to that used on notes of the Shantung Minsheng Bank (Provincial). These pailou notes are unusual for having blue signatures. 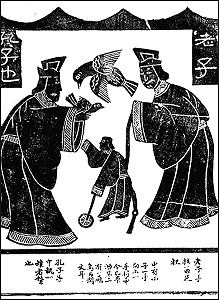 ​The 1936 1 Yuan (P 211) and 1937 5 and 10 Yuan notes portraying Dr Sun Yatsen on the front, are the only Chinese government notes (or any Republican period notes) to ever depict Confucius himself; in the back image in which he is shown meeting Lao Tzu, and this is based on an ancient stone relief.  ​The image to the left is a detail of a nineteenth-century woodblock copy of part of this stone (tomb) relief from the Wu shrines in Jiaxiang county, Shandong province. This depicts a mythical meeting between Confucius and the legendary founder of Daoism, Lao-Tzu, and dates from the Second century A.D.

The Japanese occupiers however used portraiture of Confucius on many occasions in the issues of their puppet banks: the Federal Reserve Bank of China and the Central Bank of Manchukuo; a hollow gesture at appeasing and ingratiating their dubious currency with a hostile and oppressed populace.

​The tripod vessel is said to be an ancient symbol of authority and unity, and is used here to represent the three ideals of "nationalism, democracy and people's livelihood," as stated by Dr Sun Yatsen.
The Thomas De La Rue, London, issues of 1936

Issued from 1936 until c1942. This series appears to have been heavily counterfeited by the Japanese at their Noborito Laboratory at Kawasaki, Japan.

Remainder notes are sometimes encountered; most commonly of the 10 Yuan. These are possibly from stock unused due to the disruption of the Japanese invasion - the KMT had sent orders for unissued banknotes in Hong Kong, Shanghai and other locations to be destroyed as soon as possible in the event of Japanese occupation, however in many cases it is reported that bank staff were unable to destroy the vast quantities of currency quickly enough. Some examples of these remainder notes, and completed notes, show evidence of having been salvaged from fire; possibly fires intended to deliberately destroy the notes so they could not be used by the Japanese. In any case, whether through unauthorised issue of Nationalist currencies and through the forgery of such, the Japanese were able to flood China with 100s of Millions of Yuan in unauthorized notes.

Notes with the Jun Li Yiu (Assistant Gen. Manager) and Li Jue (General Manager) signature combination carry a slightly different seal. The main difference is highlighted though there are others: 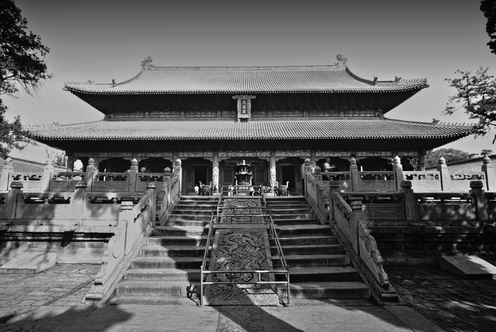 The Waterlow & Sons, London, issues of 1936
​
The Standard Catalog of World Paper Money describes the building depicted in the back vignette as the "Temple. The Palace of China in Peking". Wherever this description originates, it is erroneous. The building is the main hall (Dacheng Hall) of the Temple of Confucius 孔庙, at the Kong/Confucius estate at Qufu in Shantung (Shandong) Province (left).

All notes carry a tiny 'hidden' character on the front and a letter on the back.

The signature combinations on this series are unusual as they don't appear to make any clear chronological sense. Either one (or more) official left and later returned to a role, or one of the later combinations is a mistake?

There are two varieties of serial number font on the 1, 5 and 10 Yuan of this series. The first and less frequent is a serif serial (as that which is used on all 50, 100 and 500 Yuan notes). This only appears on A or B prefix notes with the signatures of: Huang Xiufeng (Assistant Gen. Manager) - Li Jue (General Manager).
The seals: notes with the Jun Li Yiu (Assistant Gen. Manager) and Li Jue (General Manager) signature combination carry a slightly different seal. The main difference is highlighted though there are others:
​There are also two width varieties found with a far larger or a lesser gap between the seals. This is found with both seal types. The example images of both types (standard and Tibetan overprint) of the 10 Yuan below (P 218) additionally show the two serial spacing types.

Some examples of the 1, 5 and 10 Yuan are found with Tibetan overprints in red (front) and black (back). Examples of the 50 and 100 Yuan are also found though there is some doubt as to their authenticity (for reasons unknown). Predictably, modern additions occur for all types as these overprinted notes are scarcer and hence more valuable. There is no known Tibetan overprint for the 500 Yuan. Images: (left) upper front overprint. (right) lower front overprint. The back overprints are identical but printed in black.
A video from Youtube which focus on the Qufu Temple and Confucius estate, and the Confucian ceremonies that continue there, having been revived in recent years following their halt in 1963.
​
​Return to the China Index page
Powered by