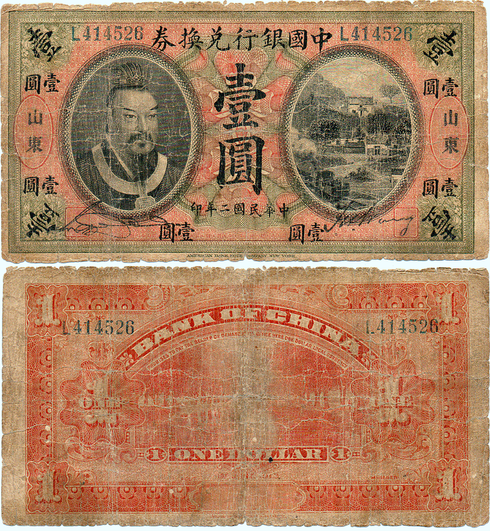 1913 1 Dollar without English place-name. A 1930's re-issue.
​The June 1st 1913 series (and that of 1912) of the Bank of China, printed by the American Banknote Company, was a re-working of the 1909 series of the Ta Ching Government Bank, which originally depicted a portrait of the Imperial politician, Li Hung Chang (Li Hongzhang).

The new 1912-1913 portrait is of legendary emperor Huang Ti - The Yellow Emperor (erroneously identified as the philosopher Mencius by the New York Times in 1912). The initially puzzling depiction of mythical Emperor Huang Ti is explained by his being used as a nationalist symbol, as an embodiment of the idea of a unified China - culturally and racially - through the myth of a common ancestor. Tradition holds that Huang Di reigned from 2697 to 2597 BC; he is credited with numerous inventions and innovations, and is regarded as the initiator of Chinese civilization, and is said to be the ancestor of all Huaxia (Han) Chinese.

Huangdi was an important symbol throughout Chinese history and had a specific importance through the closing years of the Qing Dynasty and into the Republican period. Opponents of the Qing depicted the Manchu's as "racially inferior barbarians" who were unfit to rule over Han Chinese; symbolically descended from Huang Di. His image was widely used in nationalist publications: the first issue (Nov. 1905) of the Minbao 民報 ("People's Journal"), founded in Tokyo by revolutionaries of the Tongmenghui, featured the Yellow Emperor on its cover and called Huangdi "the first great nationalist of the world." His increasing popularity as a nationalist symbol also clearly stems from the anger at the numerous foreign encroachments into China; physical and ideological.

After 1911 Huang Di was increasingly represented as the 'ancestor' of all Chinese people's (not just the Han), and even as the founder of all global civilisation; ideas which people often assume are ancient but are largely recent. 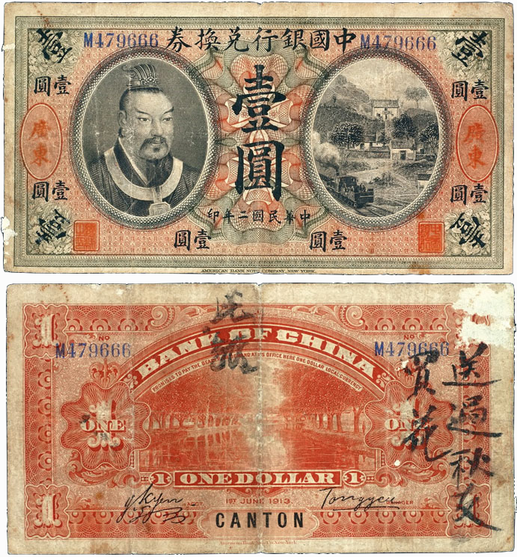 1913 1 Dollar, Canton branch, 1st issue.
​Perhaps his appearance on the first Republican currency issues was also intended to represent the new republic as a re-founding of Chinese civilisation? What is more certain however is that Huangdi was being used to represent the idea of  a unified cultural and racial identity, part of an effort to re-imagine the actually very racially and culturally diverse people of China as a monoculture. This was clearly in part a response to internal threats posed by a rapidly growing and diverse population - and more significantly by external threats both from the Western powers which had been undermining Chinese sovereignty for decades, and from such as Japan which had in 1895 defeated China in the first Sino-Japanese War. "United we stand, divided we fall" as the saying goes.

There were 16 official addresses between 1911 and 1949 in which the Yellow Emperor was proclaimed as the progenitor of the Chinese state and hence a symbol of continuity and legitimacy. His depiction on the inaugural currency of the new republic can be seen as a statement of and for national unity. His somewhat rapid disappearance from the money, can be explained by the vanity and ego of president and would-be emperor Yuan Shikai who had subsequent 1914-15 issues replace Huangdi's portrait with his own image. After his even more rapid fall, and 'convenient' death, the Bank of China issued currency depicting some of the nationally important monuments in and around the capital at Beijing.

When the 1913 1 Dollar was first issued, it was as is usual stamped with the branch of issue; in Chinese on the front and English on the back. The signatures of the bank officials were also added to the back, and the red title seals to the front. The scarce but most commonly encountered version of this note however has some curious differences. This is listed in the Standard Catalog of World Paper Money as P 30e "without placename" though of course it does have a placename, but not in English. The front of the note is marked in Chinese for the Shantung (Shandong) branch:  山東 - the back branch-name cartouche is blank. The most significant difference however is the placement of the signatures on the front, and without the red title seals. And it is these signatures that are the most revealing: that the note cannot have been issued before 1934-35, as these bank officials were not in office until that date. The most likely explanation is that these are an emergency re-issue somewhere during 1935-42, assumedly necessitated by the wartime action leading to a shortage of fresh currency. The branch it seems had a stock of un-issued remainders which it then pressed into use by overprinting them with the latest signatures.
​
Below left: an example of the 1909 note with the original portrait of the Imperial politician, Li Hung Chang (Li Hongzhang) - overprinted for provisional issue by the Bank of China in 1912.
​
Below right: an important and rare specimen example of this '1913' reissue has recently surfaced at a Chinese auction house (Yang Ming Auctions) , which does indicate that the circulation was indeed official.
Back to the China Index
Powered by