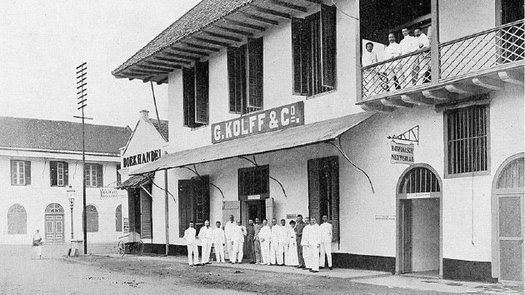 ​The Japanese invaded the Dutch East Indies on 10 January 1942, with the rubber plantations and oil fields of the Dutch East Indies, which were crucial for the Japanese war effort, as their main objective. By March they had effectively conquered the region. They were initially welcomed by the native populace as liberators from what was widely seen, often correctly, as oppressive Dutch rule. However this occupation became the most destructive and oppressive form of colonial rule in Indonesian history. On a more positive note, the disruption and vast change brought about by the Japanese led to the permanent dislocation of Dutch rule, which they were never to successfully re-establish, and gave the Indonesians the opportunity to fight for and achieve independence by 1949.

The currency was initially printed in Japan in 1941 and distributed to Japanese troops on the invading ships on-route. It was immediately brought into circulation, alongside the existing Dutch issued currency which unusually, was not withdrawn. It is unique for Japanese Invasion money as the non-Japanese text is not in English but Dutch. These were supplemented in 1944 by the Netherlands Indies roepiah, equally unusual as they were an Indonesian language version of the gulden, and again the only example of native, non-English text used on any 'JIM' banknote. The motivation behind this later issue was to use anti Dutch sentiment to benefit their continued occupation under the fraudulent campaign of an "Asia for the Asians".

As it became progressively more difficult to ship money from Japan, as of October 1943, the 5 and 10 cent notes were printed by Kolff in Jakarta (Djakarta Insatsu Kodjo). This company went on to print the entire successor series to these notes. (right: an early photo of G. Kolff & Co., printers and booksellers)

After the war, the 'Japansche Regeering' issues were redeemable at a rate of 30 to 1, however these notes continued to circulate for various periods, as did some of the pre war Dutch colonial issues. For example, the 1942 series 10 Gulden is sometimes found with an overprint on the reverse indicating it's re-issue by the Islamic Republic of Indonesia between 1953-1965.

Australian Forgeries - In the last few years it has been confirmed that counterfeits of the Japanese Occupation Money for the Netherlands Indies was produced by the Commonwealth Bank of Australia (CBA).  Evidence of this comes from three letters found amongst official files located by the Senior Archivist, Reserve Bank of Australia (RBA), which is the successor to the CBA.

The first letter was sent from the Netherlands Indies Commission to the Governor, Commonwealth Bank of Australia, on 5 October, 1942:
​

​The files are also known to contain references to the privately printed 'JIM' counterfeits, also produced in Australia during the war.


The 'S' letter used for the block and serial numbers either stands for 'Sumatra' or 'Shonan' - the latter being a Japanese name for the region meaning 'great eastern territories.'