Back to: The Japanese Occupation of the 'S' Netherlands Indies - section 1

This short lived series of two denominations (one of which was never issued), saw the change of the issuer title and currency name from the Dutch language and currency, to Indonesian. 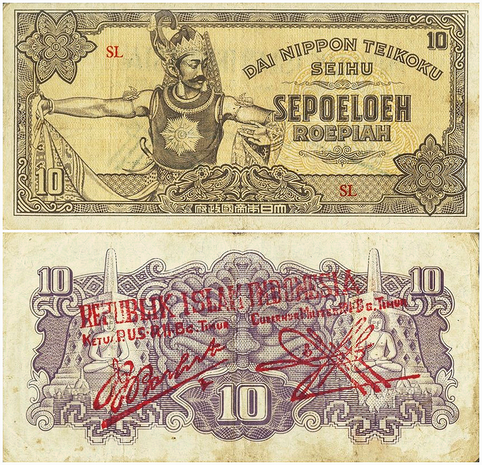 
This series of notes bares the text in anglicised Japanese and Indonesian, and refers specifically to the 'Great Japanese Empire' (Dai Nippon Teikoku) rather than the slightly more subtle Japanese Government (or, De Japansche Regeering) used on earlier issues of Japanese Occupation Money. The notes of this series also no longer bare the small circular seal of the Japanese Ministry of Finance. Playing upon nationalistic sympathies, the denomination has been changed to the more nationalistic 'roepiah', replacing the gulden of Dutch colonial rule.

Right: These notes continued to circulate after the war, until 1949. From 1950 to 1965 they were used on Celebes by the "Republik Islam Indonesia" independence movement; over-stamped with the text “Ketua Pemerintah Umum Sementara, Republik Indonesia, Bagian Timur” (Chairman of the interim government of the Islamic Republic Indonesia, East Indonesia region).

The imagery depicted upon this currency

Wayang is Indonesian shadow puppet theatre, with Orang indicating a performance of real people playing the roles and replicating the puppet movements. The figure on the front of the 10 roepiah (below) is depicted in the role of Gatotkaca  - a character in the Hindu epic Mahabharata - known as the son of Bimasena, and was said to have extraordinary powers.

Borobudur, the vast 9th-century Mahayana Buddhist monument near Magelang, Central Java. The largest Buddhist monument on Earth, Borobudur was in use until the 14th century, abandoned and nearly forgotten until re-discovered beneath a layer of jungle in the 19th century. It is now both a major Buddhist pilgrimage site and tourist attraction with UNESCO World Heritage status.

"In Sumatra, one officer recalled that a month’s salary wouldn’t even buy a bowl of ramen ( a kind of Japanese noodles), which means that it cost 100 yen or more." Whether this was actual Japanese Yen or it's local supposed equivalent (the occupation currency listed here) is unclear.

The block serials indicate that only one series of each denomination was planned (albeit without any specified limit to issue) and that the second letter of the block is no longer referring to a series of issue as with earlier 'Japanese Government' notes, but now to the denomination. The series runs in reverse alphabetical order from: SK (100 Roepiah), SL (10 Roepiah), SM (5 Roepiah), SN (1 Roepiah, (SO, omitted as assigned to the earlier 100 Roepiah 'Pemerintah Dai Nippon'), and SP, (1/2 Roepiah).

Back to: The Japanese Occupation of the 'S' Netherlands Indies - section 1