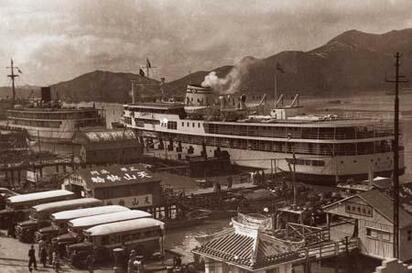 "About 10 years ago there was a project to build a motor road between Macao and Shekkia (Shekki, a former Chinese city in Kwangtung/Guangdong Province, now the Shiqi Subdistrict of Zhongshan) of 8.37 miles distance in order to supply better and shorter communication by land through the Chungshan district between the two places. Owing to the disturbed condition of the country and to the difficulty of raising sufficient funds, work could not be started for a long while. In November 1927 a Chinese company, styled Kee Kwan Highway Company, Ltd., conceived by the villagers through whose district the road was to pass was formed under the management of Mr. Cheng Tze-sheung, with a capital of $200,000 divided into 40,000 shares of $5 each.

The first stage of the road was formally opened to the public on the 18th March 1927, at a ceremony at which the Governors of Macao and Hongkong assisted, when a service of four motor-omnibuses began to ply between Macao and Tsuimi, a rich village at one time but now fallen into decay. For years the Portuguese authorities had favoured the construction of this road, which would aid the development of both Macao and Shekki alike. A monopoly for an unlimited period of time of all public vehicular traffic on the road has been secured from the Canton Government. The highway is 7 feet wide generally, in no place less than 24 feet, and has proved to be one of the best cross-country roads in the province of Kwangtung. At the end of 1931 this road had been extended as far as Saiah (Shenzhen area?), 13.19 miles from Macao, where a steel bridge, crossing the Taiwan river, is now under construction and which, according to the company's estimate, will be completed by the end of January 1932. As soon as the building of the bridge is finished, through traffic between Macao and Shekki will be open to the public. The Shelkki section of the highway has already been completed, and motor services are running there daily. A branch road, 3 miles long, connecting Hachak (Xiace), a stage of the highway, with Chung Shan Port (Zhongshan), and another one connecting Siukachuen with Samheung (Sanxiang), have been built also. There are about 80 omnibuses, 12 motor-trucks, and about 60 to 80 motor-cars passing this road daily, all belonging to the company. The annual licence issued by the government for a car using this road costs $60, and the company's annual licence $8. Besides these charges, the tolls levied by the company are from $2 to $6.50 for a single trip and from $3 to $9.50 for a return trip, according to distance and number of persons carried by each car."
​Source: https://www.macaudata.com/macaubook/ebook003/html/1922-31.htm
​Bank of Canton - (廣東銀行) 商辦廣東銀行廣州分行清理債券
​
The Taishun Commercial Bank of China - 广东大信银行
​
Various small-commercial issuers
'Nibingfa Bank' (新亨)倪炳发(镭票)
Japanese Occupation: Military Currency 軍用手票
​​
The Japanese movement against Canton commenced in August 1937, with almost daily bombing campaigns, leading to the capture of a strategic island from which invasion would commence. Japan finally took control of Canton in October 1938, with reportedly little resistance, and surrounded Hong Kong. The latter city became swamped by refugees, and some businesses also relocated within the then still British controlled colony. Others civilians had fled to Macau, or into the Chinese countryside. Much of Canton had been torched by Chinese nationalists prior to Japanese capture.
The Central Reserve Bank of China - 中央儲備銀行
The Japanese set up the Central Bank of China in Nanking (Nanjing) after they invaded southern China. This puppet bank was created in 1940-41 to serve the needs of the Japanese controlled Nanking regime of Wang Jingwei, self styled as the Republic of China. It is probably not coincidental that the name of the bank - The Central Reserve Bank of China - was that originally intended for the re-organised Central Bank of China following the Kuomintang Governments currency reforms of 1935. That scheme never transpired.
​
Communist and Peoples Republic of China related issues
​
Following the defeat and surrender of Japan in 1945, the peace was short lived. The uneasy and in some regions almost non-existent truce between the Nationalists and the Communists whilst they fought the Japanese, soon broke down. Despite American led efforts to prevent the resumption of the Civil War, it was not long before fighting broke out. Money played a key role in this period as it had during the conflict with Japan. Hyperinflation, growing poverty and inequality turned many against the Nationalist government.

Mainland China slowly fell under Communist forces, as Chiang Kai-shek and his government abandoned Nanking; first to Canton which briefly became the capital of Nationalist China, and then to Chungking. Canton was taken by the PLA (Peoples Liberation Army) on October 14; Chungking followed on November 30th. In December Chiang and the government finally abandoned the mainland, the capital was transferred to Taipei, Taiwan Province where it has remained ever since. Mao meanwhile declared the founding of the People's Republic of China, at Peking (Beijing) on October 1, 1949.
Southern Peoples Bank 南方人民銀行
​
Food and commodities ration coupons:
​
The End
​
Return to: the main index of China's Towns and Cities: The Places Behind the Branch Names
​
Return to Canton Section 2: The Currency
Powered by