Return to the China Towns & Cities Index Page
fort in Xiamen, then part of Quanzhou, to guard against pirates.

In 1541, European traders (mainly Portuguese) first visited Xiamen. The Portuguese were expelled shortly after, though British ships occasionally came until 1757 when foreign trade was restricted to Canton (Guangzhou) near what would later develop into Hong Kong. The city developed into China's main port by the nineteenth century, for exporting tea.

​After the Manchu Qing Dynasty overthrew the Ming in 1644, Ming loyalist Koxinga used Xiamen as a base to launch counterattacks against the invading Manchus from 1650 to 1660.
​ 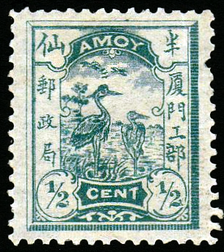 Above: the main buildings of Amoy University, c.1930. Right: a 1/2 cent stamp of 1894, issued from the concessions.
​
​Amoy was among the first treaty ports, and several concessions were established here from the mid 19th century. Surprisingly little information seems to be available for them. Most of the foreign residents lived on Kulangsu Island in Amoy Harbor. Great Britain established its concession in 1851. Japan also established a concession much later, in 1900. During 1898-1901 the United States Government considered establishing a concession at Amoy primarily to be used as a naval base. With the taking over of the Philippines in 1899 the naval station idea in China was abandoned in 1901.

In 1902 most of the island was formed into an International Settlement similar in organisation to that of the International Settlement at Shanghai. One of the principal differences however was that here the Chinese residents had a voice in the local government. Britain relinquished its concession in 1930 but maintained its rights in the International Settlement. In 1939 Japan attempted to take over the International Settlement to protect it from disorders brought on by the Japanese themselves. American and British sailors were sent ashore to protect the integrity of the settlement and eventually Japan backed down. But not for long: in December 1941 following the attack on Pearl Harbor, the Japanese seized control. After their defeat in 1945, the remaining rights over the International settlement and concessions were relinquished to the Chinese government.
​On November 22 1933, Eugene Chen and the leaders of the 19th army of the National Revolutionary Army, set up the People's Revolutionary Government of the Republic of China, at the provincial capital of Foochow (Fuzhou). Blockaded by Chiang Kai-shek, it lasted less than two months.

​During World War II, Xiamen was occupied by Japan from May 1938 to September 1945. A local 'puppet bank' The Amoy Industrial Bank' was established by the Japanese (see entry below).

​In the Chinese Civil War that followed the defeat of Japan, the islands of Xiamen and Gulangyu were captured by Communist forces in October 1949 but an assault on the island of Jinmen was repelled by Nationalist defenders. The battle line of the war remained in the narrow channel between Xiamen and Jinmen. In 1955 and 1958, mainland China escalated Cold War political tensions by shelling offshore islands held by Taiwan including Jinmen in what became known as the First and Second Taiwan Strait Crisis. The Nationalists responded by reinforcing Jinmen and shelling Xiamen. Due to political tensions, the eastern half of Xiamen Island and much of the Fujian Coast facing the offshore islands remained undeveloped in the 1960s and 1970s.

Fujian remains the only province split between the control of mainland China and Taiwan, though inevitably the mainland controls the vast majority.
​

Above; a view of the colonial architecture of Amoy, from a hillside. c.1900
The Bank of China - 中國銀行
The Bank of Communications - 交通銀行
​
The Amoy Industrial (Development) Bank - 厦門勸業銀行
​
Amoy Special Municipal Government (Xiamen)
​
Fukien Provincial Bank (Fujian) - 福建省銀行
​
A few 1900s to 1930s images of the people of Amoy/Xiamen

Return to: the main index of China's Towns and Cities: The Places Behind the Branch Names
Powered by