Updated 20 January 2018
Following the end of the Second Opium War (1860), Tientsin became a Treaty Port, opening to foreign trade and the establishment of foreign controlled self-contained concessions of which there were at one point nine. The most significant were those of Britain, France and Japan. 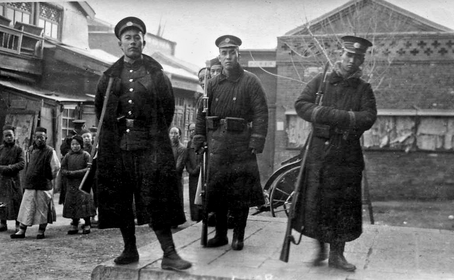 ​Anti-foreigner tensions simmered and finally erupted, including such as the 'Tianjin Church Incident' of 1870. Roman Catholic missionaries who ran an orphanage attached to the then newly built Wanghailou Church (Church Our Lady's Victories) were accused of the kidnap and brainwashing of Chinese children. Tensions escalated into a riot in which both the church and nearby French Consulate were burnt and 18 people killed including 10 nuns and the Consul. The Qing government was forced to pay compensation for the attacks. 30 years later the concessions were attacked again during the Boxer Rebellion of 1900. These renewed antiforeign demonstrations led to the shelling and occupation of the city by Allied (Western) forces and the destruction of the old city wall.

The Qing general, minister and Viceroy of Zhili province; Yuan Shikai, began to modernise the city from 1902, establishing a modern police force of 2000 men, and a democratically elected city council. (photo: Tientsin police in 1912).

In the lead up to the Xinhai Revolution of 1911, Tientsin was a regional centre for anti-monarchist activity: "Some influential revolutionary activities, such as the Beijing Uprising, were plotted in Tianjin," ... "After the 'Preparatory Council for Constitutionalism' in 1906, Tianjin became the center of the United League of China, a nationwide revolutionary society."
Tianjin historian Zhang Shaozu.

Below: (left) The Drum Tower, covered with advertising including the trademark of 'General Jintan' (the hat wearing bust) of Morishita Ren Dan - China - First Aid drug. Morishita (a Japanese company) still exists. (right) The Japanese Concession.
A Steamer to Tientsin (Peter Quennell, late 1920s):
"The day was over when we reached the suburbs of Tientsin, and a factory whistle blew dismally from a yard. There was some shouting when a child fell into the river and was fished up, breathless and dripping, among the boats. Through the cold grim twilight which was closing down, we saw the dark water-front of the modern city; villas, banks and warehouses in dark brick, a crowded quayside and a line of anchored vessels.

The steamer edged in towards the quay, and amid the Chinese crowd, densely packed beneath the rail, I noticed two Europeans standing apart. 'White Russians, probably,' said my companion, both unspeakably haggard and the worse for wear, in dirty hats, frayed collars and shapeless overcoats, gazing with pinched faces at the deck, waiting, perhaps, for someone who never arrived....

Upturned faces, shaven heads beneath the rail; then the gang-plank was dragged noisily into place. The entire crowd seemed to shove forward across the gangway, and were in a moment swarming and trampling through the ship - money changers clinking silver-dollars, vague officials, soldiers and a rabble of coolies. They elbowed us; they argued fiercely over our luggage. It was snatched up and trundled off into the darkness.
​
The hotel entrance was a few steps across the quay. A door closed on twilight and confusion, and the smell of floor polish and a wealth of scarlet and gold paint emphasised the nationality of the proprieter. He was English; that went without saying; it was all so clean and tasteless and good-natured. ...English residents passed stiffly to and fro. A middle-aged woman with a lapdog under her arm, waddled with flaccid dignity through the lounge. Two young officers, Sandhurst to the backbone, sat irreproachable and aloof in a far corner; while the Chinese boys, like queer archangels in their white robes, slipped sulky looking but attentive between the chairs.

Newspapers were hanging in a rack; and from these we learned that a pair of female missionaries had just been murdered in a city of the interior and that such-and-such a bandit was on the move; tens of thousands reported dead from another place - announcements which occupied as little room as a flower show in some local English sheet. Instead of a Harvest Festival there was a massacre, a rumoured insurrection instead of a christening. The journalists had taken their cue from the landscape; they had forgotten to appear ever so slightly surprised...."

(Source: 'A Superficial Journey Through Tokyo and Peking' - Peter Quennell. p164-166)
Gordon Hall and the Concessions

Gordon Hall was the administrative centre of the British Concession; an eccentric gothic building that would have looked out of place in China if not for being surrounded by streets of equally alien architecture - though this was one of the more unusual examples. In front stood a typically British municipal park which could have been transported from any town in Britain, and complete with a WWI war memorial. The Concession was formally handed back to the Nationalist Government, then based at Chungking, in 1943, though they were unable to take possession for another two years until the defeat of the Japanese who then occupied Tientsin and much of eastern and northern China. The Hall (below, left) managed to survive the war, and the Cultural Revolution fairly unscathed but was severely damaged in an earthquake in 1984. A restored remnant of what appears to be one side of the building remains (below, right).
Beginning with the British and French Concessions established from 1860, there were 9 concessions in total. The US concession was only informally held and became part of the British Concession in 1902. The Austrian, German and Russian Concessions ceased early; between 1917-1920, due to WWI and the Russian Revolution. Belgium gave up it's concession in 1931. The remainder were steadily handed back to Chinese control from 1943, with the Italian concession the last to cease, in 1947.

Below: (top left) A Russian Orthodox church in the Russian Park. (top right) numerous destroyed and fire damaged buildings, casualties of the 1912 revolution. (lower left) junks on the Peiho River which runs through Tientsin, with the French Catholic former cathedral, the Wanghailou Church, and factories in the background. (lower right) a crossroads in the French Concession.
The Last Emperor

In early 1925 Aisin Gioro Puyi, the last emperor of China who had abdicated as a child in 1912, was evicted from the Forbidden City in Peking (Beijing) by the Warlord General Feng Yuxiang (founder of the Bank of the Northwest). The Imperial Court had been essentially confined there since the revolution of 1912, in a deal with the new republican government in which Pu Yi and his court retained their titles and control of the central part of the Forbidden City, and the nearby Summer Palace. However in November 1924 following a successful coup against the government by Feng Yuxiang, the agreement with Puyi and the Imperial Court was annulled: the emperor was stripped of his now honorary titles and expelled from the palace.

Puyi and his core entourage briefly moved to his father's house in Peking, however, fearing for his safety he moved to the Japanese Concession in Tientsin in February 1925, and firmly into the influence of the Japanese. He first lived at the Zhang Garden residence, and then moved to a large villa, the Garden of Serenity in 1927. While there, he and his advisors debated plans to one day restore his rule, and negotiations were entered into with the Japanese with the aim of achieving this. During 1931, Manchuria was seized by Japan. Puyi left Tientsin in November for Manchuria where plans were finalised to install Puyi as the Chief Executive for the new Japanese puppet state of Manchukuo (Manchuria, NE China - the homeland of the Manchu Qing Dynasty). In 1934 he was officially crowned as the Kang-de Emperor, and remained as the puppet ruler of Manchukuo until Japan's surrender in August 1945.
Below, left: Puyi, 2nd from left, with his tutor Reginald Fleming Johnston (left) and the 'empress' at right, seated in the grounds of the Zhang Garden in 1926.     Below right: Puyi in Tientsin, or shortly after his arrival in Manchukuo.
The End of Western Colonialism, and the Rise of Japan
​
Short newsreels of the early period of Japanese Occupation:
Tientsin Bank Branches, Banknotes and their Vignettes
​
​
The Bank of Communications 交通銀行
​
Pei Yang Tientsin Bank 北洋天津銀號
​The Provincial Bank of Chihli (Zhili) - 直隷省銀行
​
(Provincial) Bank of Hopei - 河北(省)銀行
Tah Chung Bank - 大中銀行
The Chartered Bank of India, Australia and China - 印度新金山中國麥加利銀行
The Hong Kong & Shanghai Banking Corporation (HSBC) 香港上海匯豐銀行
Return to the main index of China's Towns and Cities: The Places Behind the Branch Names
Powered by