Return to the China Index 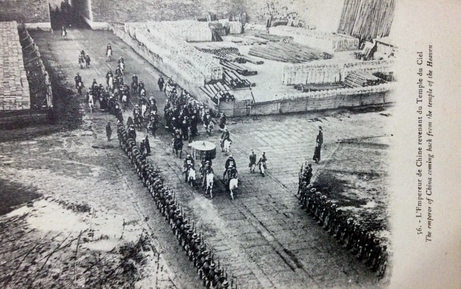 The Guangxu Emperor (d.1908) returning from the Temple of Heaven.
The Temple of Heaven, founded in 1420, is a superb complex of 660 acres of fine cult buildings set in gardens and surrounded by historic pine woods. In its overall layout and that of its individual buildings, it symbolizes the relationship between earth and heaven – the human world and the heavenly realm – which stands at the heart of Chinese cosmogony, and also the special role played by the emperors within that relationship. The temple is the largest and most complete of it's type in China and the wider world. Though regarded as a Daoist temple, Heaven worship is the oldest surviving religious tradition in China, predating Daoism and can be traced back at least three to four thousand years, to the Xia Dynasty.

The significance and longstanding popularity of the monument has made it a natural choice as a symbol of China from the declining decades of the Qing Dynasty through to the Republic and at various periods to the present. As such it has been frequently depicted on the currency and stamps of China, both official national issues and numerous regional issues - including the Japanese puppet notes for occupied China.

The Hall of Prayer for Good Harvests is the three-tiered circular structure which most people think of as 'the temple,' and is the feature most commonly depicted on money - and elsewhere - is only a part of the complex: in total there are 92 ancient buildings incorporating 600 rooms.

Located south of the Forbidden City on the east side of Yongnei Dajie, the original Altar of Heaven and Earth was completed together with the Forbidden City in 1420, the eighteenth year of the reign of the Ming Emperor Yongle. In the ninth year of the reign of Emperor Jiajing (1530) the decision was taken to offer separate sacrifices to heaven and earth, and so the Circular Mound Altar was built to the south of the main hall for sacrifices particularly to heaven. The Altar of Heaven and Earth was thereby renamed the Temple of Heaven in the thirteenth year of the reign of Emperor Jiajing (1534). The current arrangement of the Temple of Heaven complex was formed by 1749 after reconstruction by the Qing emperors Qianlong and Guangxu. After this the site remained little changed. The Hall itself was damaged by fire and largely rebuilt in replica the 1890s, and the complex suffered some damage during it's occupation by Alliance forces during the Boxer Rebellion of 1900. 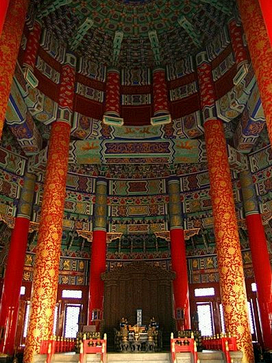 Despite it's obvious imperial associations, the importance of the site ensured that it continued as a symbol of China after the 1911 revolution, throughout the Republic - though ceremonial sacrifices and other rituals to Heaven were banned, and the site left un-managed for some years. However, the very last imperial rite performed at the Temple occurred in late 1914. The politician and general Yuan Shi-kai conspired his way into power, becoming the first President of China after provisional president and founder of the Republic, Dr Sun Yatsen had given way in order to maintain the stability and survival of the new political order. However Yuan had other ideas and by 1914 was preparing to proclaim himself Emperor. In this goal he performed the Imperial sacrificial rites at the Temple of Heaven. When he finally did take the throne, his reign lasted a mere 83 days as unrest and civil war broke out in opposition to his new status. Expecting support from foreign powers, he was dismayed to receive none and abdicated, dying soon after. His presidential and imperial rule fatally damaged the Republic, leading to warlordism, further civil war and a nation less able to fend off Japanese Imperialism.

The Temple and grounds opened to the public in 1918.

The complex further survived the Cultural Revolution during the 1960s, though with some damage and neglect, and the loss of some edge sections of the parkland. The site re-opened during the late 1970s.
Some examples of the money
​
​Above: Aluminium 1 Jiao of 1941, issued by the Federal Reserve Bank of China. The bank has been authorised by the puppet Provincial Government of China to issue coinage from it's outset, but in the event and for reasons unknown, the bank substituted coins for paper notes until these issues, minted from 1941 to 1943.
​
Powered by