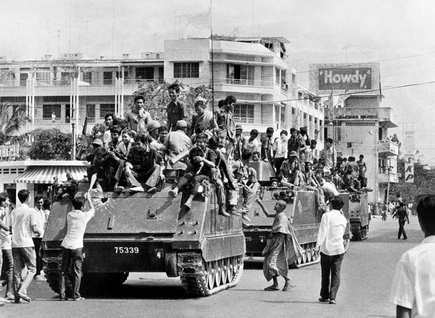 Bizarrely, Norodom Sihanouk was declared the titular head of state under the Khmer Rouge during 1975-76, a fact which was has blackened his name with many, though he resigned in protest allegedly in response to witnessing the forced labour and population displacement in the countryside. He then received an US$8000 per year pension from the government, which is more than odd in a supposedly 'moneyless' society. Unexpectedly, he ruled again as King from 1993 - 2004, though in a purely honorific role. Deceased as recently as 2012, he his claimed to have held more political offices than anyone else, alive or in history.

The Khmer Rouge took charge following years of bloody conflict, in April 1975. The establishment of Democrat Kampuchea was proclaimed 15 January 1976. Unfortunately for millions within Cambodia, this victory may have temporarily ended the warfare, but would only be the beginning to a gruesome end, as the new government turned on it's own people, massacring over a million people through forced labour and executions and causing the deaths of over a million more though famine and disease. The underlying reasons behind this extreme widespread violence are still being debated; certainly decades of violent regional warfare was a clear factor though by no means the only contributing one.

In addition to the human rights abuses, the legal system was effectively abolished, regional administration thrown into chaos and foreign relations were only maintained with China, North Korea and Vietnam - and were soon lost with the latter. Cities were emptied out, organised religion was abolished, and private property, money and markets were eliminated. The central bank was destroyed and a barter system replaced Cambodia's currencies.

Fortunately the beginning of the end of this regime came about when the Khmer Rouge turned on their former allies, the also recently victorious Vietnamese communists, and launched attacks within southern Vietnam over disputed territory. They also killed virtually all of the Vietnamese population of Cambodia (in addition to other ethnic minorities). Eventually the Vietnamese counter-attacked and invaded Cambodia, overthrowing the Khmer Rouge and establishing their own compliant government in 1979. The Khmer Rouge however survived for some time in regions of the country and even formed a government-in-exile which held on to Cambodia's seat at the UN until 1993. After this however the organisation rapidly diminished and effectively ceased to exist in 1999.
​The Money: The Bank of Kampuchea
The Khmer Rouge introduced their short lived currency in limited regions for about two months in 1975, before altogether eradicating money within Cambodia, instituting a barter system in it's place. The National Bank of Cambodia headquarters was blown up shortly after they occupied the capital. Under their regime, all banks were closed and the use of money abolished.

​It should be noted that journalist John Pilger had the impression that the bank was blown up as the Khmer Rouge retreated in 1979?

The currency was designed and printed in Shanghai by the Central Printing Factory and is in many ways similar to issues also printed for the Pathet Laos in 1968.

note: SCWPM: Standard Catalog of World Paper Money
Below: The National Bank of Cambodia in 1975, and it's ruins, taken in a photo of c.1979
Cambodia - Khmer Rouge zones issues 1993 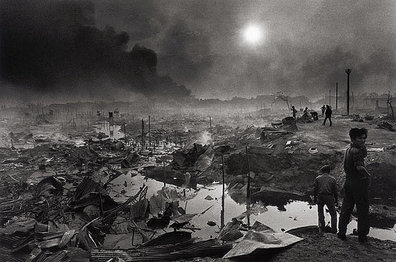 In 1979, the Khmer Rouge were pushed out of Phnom Penh, but they still controlled some northern and western provinces until 1993, when large numbers of them surrendered. The last small groups finally surrendered in 1998.

During their control of these northern and western provinces, the Khmer Rouge issued a series of lithographed notes, in 1993. They were printed on an old printing press from a lottery ticket printer in Bangkok. The press was acquired and brought by the Thai military to the Khmer Rouge in Anlong Veah, Cambodia. The issue was withdrawn after a few years and ordered destroyed but some examples survive. Inevitably there are numerous fakes.

The notes carry the signature of Khieu Samphan: he succeeded Norodom Sihanouk as President and head of state of Kampuchea 1976-1979. He succeeded Pol Pot as the head of the Khmer Rouge in 1985, remaining as such until 1998. He is the second oldest surving senior member of the organisation; On 7 August 2014, he and Nuon Chea (former Prime Minister) finally received life sentences for crimes against humanity - though they are appealing the conviction.

Below: one way of detecting many modern fakes is by comparing the black text which on genuine examples is solid black. The fakes have the text dot printed, with fuzzy edges. Keep in mind that the printing and paper of these notes should appear similar to 1970s-1980s lottery tickets from the region. Source: stampboards.com
The Money
Return to the Index page
Powered by